On average, the first symptoms of malaria usually occur 10 days after the bite of an infected mosquito. The parasites (hypnozoites) of Plasmodium vivax and Plasmodium ovale remain dormant in the liver. It can take months or years for the parasites to become active and symptoms to manifest. 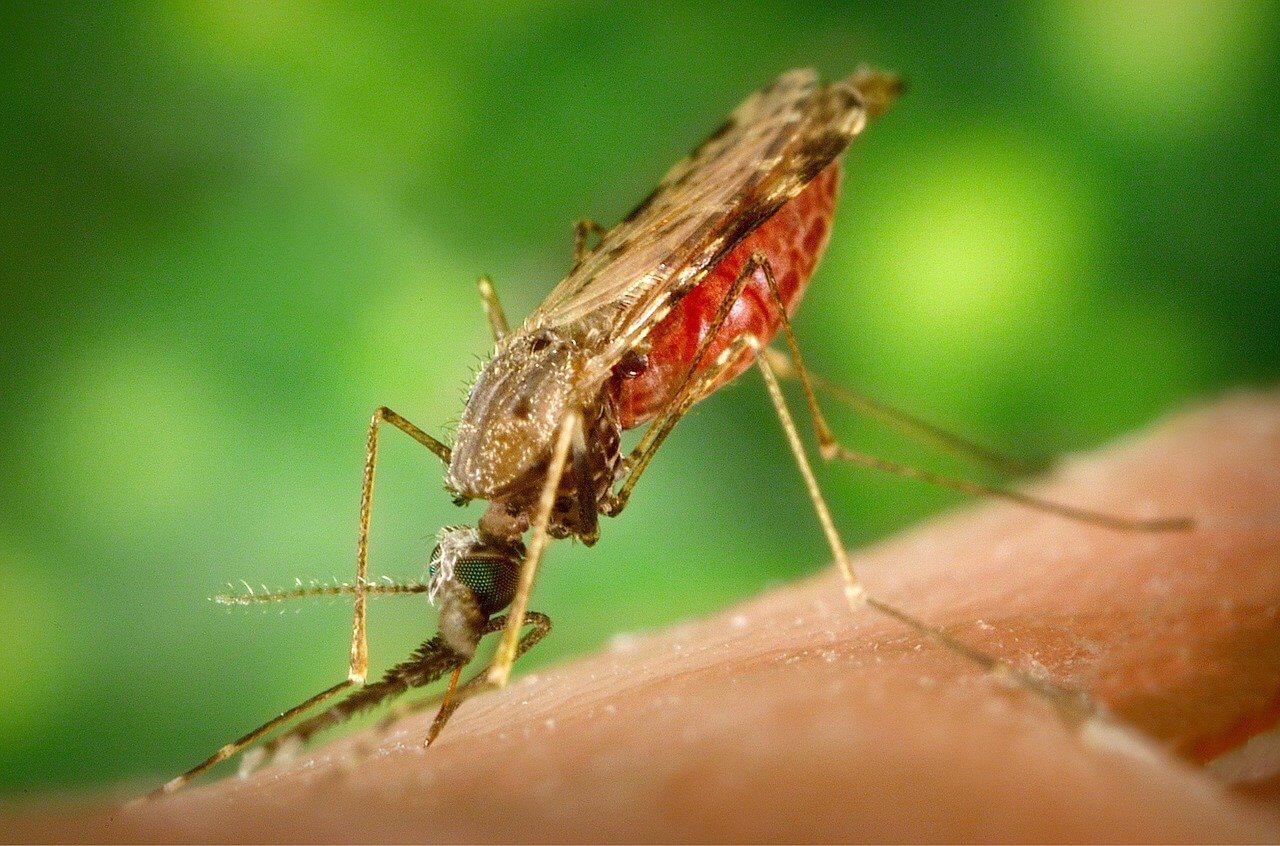 Malaria, a not-in-my-backyard problem. Or is it?

Nearly everyone will have heard of malaria. Most people will likely think of it as a tropical disease, one of the many “not-in-my-backyard problems” and only needed to be taken into consideration when travelling to a malaria-risk area. Not many people realise that malaria was still a problem in Europe until 1975.

How do you get it?

Malaria is a life-threatening infectious disease caused by parasites. The bite of an infected female Anopheles mosquito causes the transmission of the parasite to people. The parasite is not directly transmittable between humans. There are 5 parasite species that cause malaria in humans, and 2 of these species – Plasmodium falciparum and Plasmodium vivax – pose the greatest threat.

Where does malaria occur?

Nearly half of the world’s population was at risk of malaria. Most cases and deaths occur in sub-Saharan Africa. However, the WHO regions of South-East Asia, Eastern Mediterranean, Western Pacific, and the Americas also report significant numbers of cases and deaths. The WHO African Region carries a disproportionately high share of the global malaria burden.

What are the symptoms of malaria?

When contracting malaria tropica (the most dangerous type), this can be deadly within 48 hours. In the case of other malaria types, the symptoms start between 10 days and 6 weeks after the bite.
There are four variants of malaria that you can contract. As said before, malaria tropica can be fatal within 48 hours. The other three variants have a less serious disease progression. The malaria symptoms usually consist of attacks lasting four to eight hours, which recur every few days.

The graphic representation on this map is based on data from 2017.

Prevention of malaria is directed at travellers to and from malaria-risk areas in (sub)tropical regions, The risk to contract malaria is reduced by taking malaria pills. In addition, wearing skin-covering clothing and the use of Anti-Insect and mosquito nets during the period when mosquitoes are active, are good measures to reduce the risk of infection.

A mosquito net must fulfil a number of conditions to function as a good protection against (malaria) mosquitoes; a mosquito net only offers extra protection if it is closed all around, is made of durable polyester and the mesh is no larger than 1.75 mm. Use an impregnated mosquito net in malaria risk areas. The mosquito nets of Care Plus® are treated with the durable Durallin® impregnation technology. This impregnation works for up to three years with daily use and prevents mosquitoes from landing on the net and biting through it. The mosquito net must be wide enough so that you do not lie against the net, because then it does not provide optimal protection. Ventilate the room well and hang your impregnated mosquito net before sunset, as malaria mosquitoes become active then.

Furthermore, a malaria vaccine is still being developed. There’s a low-efficacy vaccine available since 2015, with less than 40% effectivity after 4(!) vaccinations. Only in 2019 more extensive vaccine programs have been started in 3 countries in Africa. In 2020, phase 3 clinical studies have been started with another potential vaccine that is however not yet deployable against malaria.

World Malaria Day was established in May 2007 by the World Health Assembly, the decision-making body of World Health Organisation. The day was established to provide “education and understanding of malaria” and spread information on “year-long intensified implementation of national malaria-control strategies, including community-based activities for malaria prevention and treatment in endemic areas.

Besides providing education, World Malaria Day is also a good moment to look back on results obtained. Over the last 2 decades, a total of 7,6 million lives have been saved from malaria globally, of which 94% in Africa.

After Europe being officially declared malaria free by the World Health Organisation in 1975, other countries followed afterwards. Algeria, for example, has now been officially declared malaria free thanks to the efforts of professional teams and good and free healthcare in the country. This allowed good preventive action and rapid action to be taken on malaria outbreaks.Positive developments can also be found in Sub-Saharan Africa, with many more pregnant women and children sleeping under impregnated nets, from 3% in 2000 till 52% in 2019.

Until the world is free from malaria, drawing attention for the deadly disease is still needed. Preferably every day, but at least once a year on World Malaria Day. World Malaria Day is every year on 25 April.
To mark World Malaria Day, on the 25th of April, Travel Health Group hosted a podcast featuring interesting guests who are all contributing to making the world malaria free by 2030. You can listen to the insights of Bart Knols (vector biologist), Ashaba Faridah (CEO and founder of Bambino Life Foundation) and Michiel Lampers (import and export manager at The Coffee Quest Europe) on the world’s biggest, avoidable “killer” infectious disease, malaria.